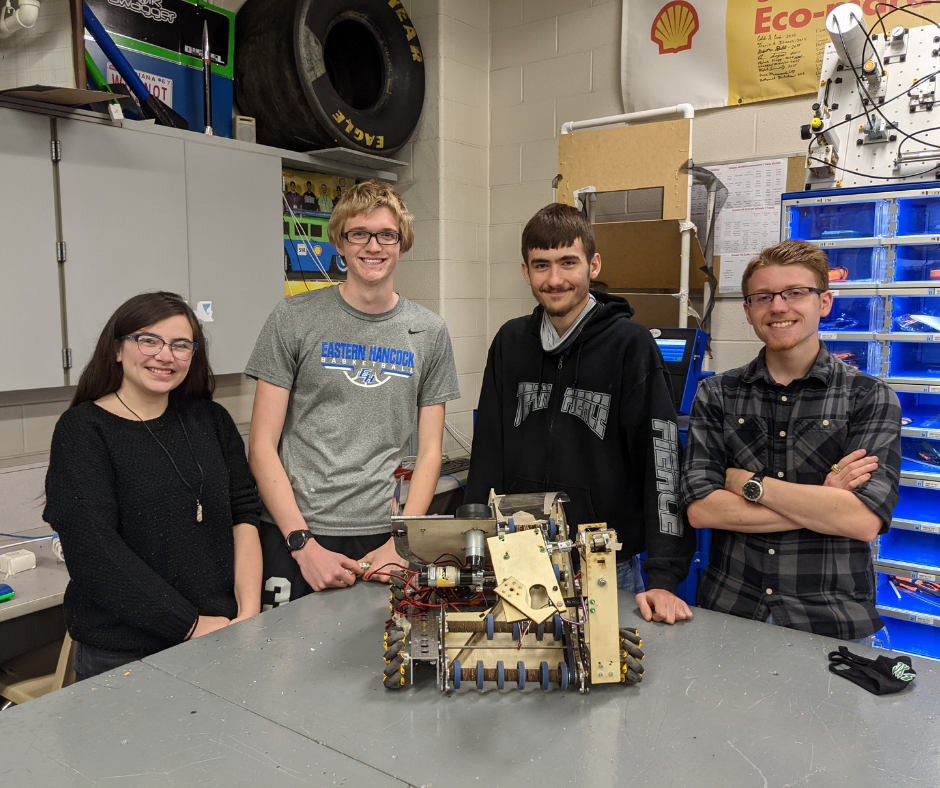 The Engineering Career Program students at the New Castle Career Center (NCCC) recently competed in the “F.I.R.S.T.” Tech Challenge (For Inspiration and Recognition of Science and Technology). This competition attracts nearly 7,500 teams from across the country to complete science and technology challenges.

The challenge for this year’s competition was to build a robot that could pick up and foam rings and place them into 1 of 4 scoring areas on a 12’x12’ playing field. In a traditional year, the playing field would be occupied by four robots with teams of 2 playing against one another. This year, however, a hybrid system was developed so teams could compete virtually from their own facilities rather than travel to a central location.

The NCCC team was a member of the South Central League, which represented schools in Indianapolis, Southport, Greenwood, and New Castle. This was the first year NCCC has competed in this competition, so the students set their sights on creating a reliable designed robot.

“As our build season had just gotten started, we encountered the COVID shutdown and we started to feel the constraints of actual lab time available to build the robot,” explained Kelly Neal, Engineering Career Instructor. “Ultimately, lack of lab time resulted in our team missing many of the virtual competitions. The students, however, continued working without hesitation and completed their robot in time for the last competitive event.”

The team worked their way through the competition, increasing their scoring percentage by nearly 150% by the last round. Ultimately the team placed 11th out of 20 teams in the South Indianapolis Invitational.

“Even though we had a senior-led team, there is great optimism that the remaining juniors will come back next year and pick up where we left off,” Neal continued. “I hope to see them continue to grow in their experience and readiness.”

For more information about the Engineering Career Program or the 17 other career programs offered at the New Castle Career Center, visit nccareercenter.org