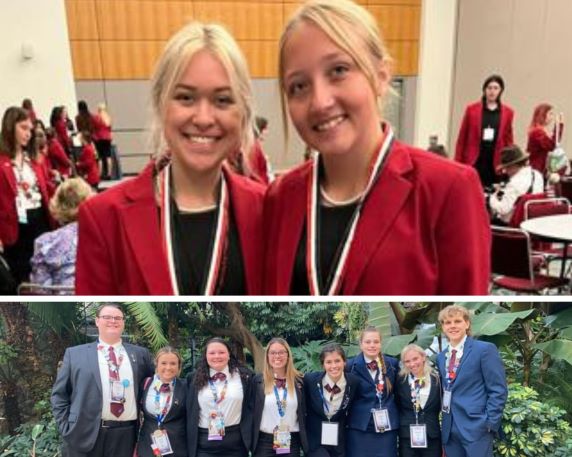 For the New Castle Career Center Education and Health Services programs, this summer was about more than time off and relaxation. Students along with their respective instructors spent time at conferences dedicated to professional development and honing the skills of their specific programs.

Education career students spent a week in San Diego, California, attending the FCCLA (Family, Career, and Community Leaders of America) National Leadership Conference. During the conference students, Rheanne Cary and Cayla Claar presented their “Student Body” project and received 11th in the nation earning a gold medal. During the opening session, Rheanne was featured on the jumbo screen explaining why FCCLA is important to her. The students also attended state and national meetings while there and traded pins with other FCCLA state members while getting to know students from all over the United States.

The conference was a great learning experience for the students according to Education Instructor, Leesa Meyers: “This trip helped the students prepare to give professional presentations. They were involved in state and national conference meetings. The skills they learned at this conference will be instrumental as they enter college and will help them be successful in their education careers.”

Health Science Education students also dedicated time during the summer to learning and growing as they attended the HOSA International Leadership Conference held at the Gaylord Opryland Resort. Nine students attended the conference along with instructor Angie Talbott. These students had previously qualified for international competition by placing in the top three of their respective events at the HOSA State Leadership Conference held in Indianapolis in April.

Nolan Brown, Erica Glunt, Ally Madden, Brooke Connover, Clayton Conway, Allison Wissler, Hannah Tracy, Addison Alfrey, and Jordan Flynn all attended the conference. The students had the opportunity to compete in a myriad of events including Nursing Assisting, Public Service Announcement: Be the Match, Job Seeking Skills, Prepared Speaking, and Researched Persuasive Speaking. Clayton Conway competed and placed 2nd in Prepared Speaking with the topic of “Shatter Your Expectations” at the International Leadership Conference and Erica Glunt placed in the top 10 in the nation in Nursing Assisting.